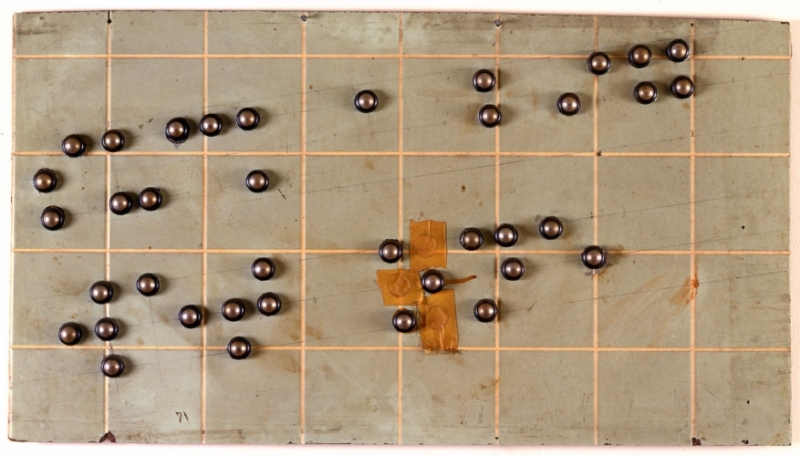 One of the discoveries of the Déjeuner sur l’herbe, is the point: when he realizes Limit between concrete and water, from the photograph of the Déjeuner, Alain Jacquet enlarges the image to the extreme until to distinguish only the distorted points of the grid.

Le Point’s obsession haunts Alain Jacquet’s work. He is passionate about its symbolic and physical properties, in a rigorously methodical, empirical, almost scientific way. His reflection on the Point is not a period, a moment in his life as an artist: it is both the starting point of his creation and the result of a modus operandi pursued by Jacquet throughout his career . He encompasses all his work in a circle whose “center is everywhere and the circumference nowhere”.

Alain Jacquet’s experiments with the trame point lead him to the braille point. For Helen Keller, the Point is a link with the world; for the blind, the point is a unity of meaning. Everything happens as if the point of Braille contained, in hollow, the world and its meaning. Jacquet dissects the point, dissects it, analyzes it. He cuts it up and fragments it. Up to make it go up in smoke with its Braille Fumes. The point is synecdoche: a “part” which accounts for a “whole”. Le Point is a sphere, a globe, a world …The artist pushes analytical research and the quest for meaning also through games of associations and parallels. He finds in the six points of the braille cell the six colors of his Images of Epinal. His obsessions meet and merge. His work on braille leads him to reflect on the binary system, in particular on the Chinese binary system called I-Ching, and on the question of the masculine / feminine, between alliance and confrontation.

Alain Jacquet will synthesize all these systems and these reflections in his Grande Gaufre, each block of which is a braille version of the 64 hexagrams of the I-Ching. This three-dimensional work is the culmination of his work on braille, both signifier and signified, a perfect circle that would encompass THE meaning and translate it for THE senses.

With Braille, Alain Jacquet gives us to see, to touch, to read, he lets his creation speak, lets it escape from “confused words” and invites us to hear, by that, the “correspondences” of the World … and his work.